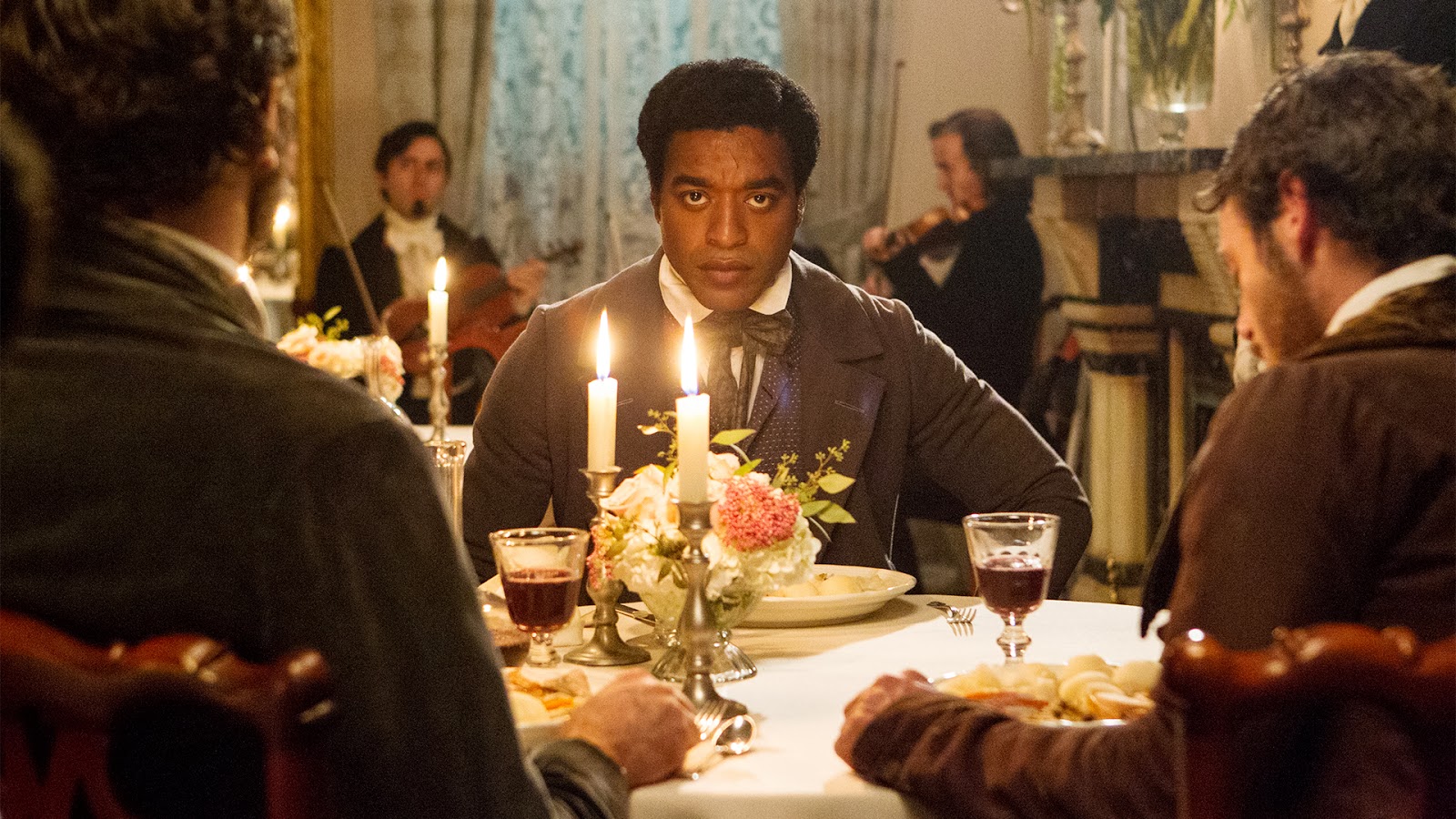 When I first watched 12 Years a Slave back in November, I was so overwhelmed by the experience that I felt like I couldn't write about it. It wasn't merely that it was good, but I found the story of Solomon Northup so moving that I couldn't really put my thoughts into any cogent order. Despite that, I had no qualms putting it in my Top 20 of the year, and was pleased to see how much success the film enjoyed both critically and commercially.

As time passed, though, my memories of the film faded. The shock of the first viewing became fuzzier, and I started to doubt whether I actually liked it beyond the undeniable impact that it had on me initially. In the interests of keeping myself honest as a critic - and because I have a somewhat pathological insistence on writing reviews of all the Best Picture nominees in a given year - I rewatched Steve McQueen's film to see if it would have as much of an impact the second time around.

What immediately becomes apparent, and what really surprised me, was how emotionally cold and distant the central story of Solomon Northup (Chiwetel Ejiofor) felt, especially in comparison to the impact it had on me previously. With the exception of the ending, which I'll get to later, I didn't find Solomon's story affecting in anything other than an abstract way. Of course what happened to him was horrible; you'd have to be a cold-hearted bastard not to feel for someone who is kidnapped, sold into slavery, and loses everything that he cares about. But McQueen as a director is very rigorous and austere in his choices, and tends to downplay or obscure the emotion of a scene wherever possible in favour of capturing mood and texture. This approach is brutally effective when depicting the violence that Solomon and his fellow slaves endure, particularly during the scenes in which they are beaten and the camera bears unblinking witness, never giving the audience the relief of looking away from either the act itself or the pained reactions it elicits. The sound design, in particular, makes the beatings feel especially real and tangible.

However, when it comes to showing what the characters are feeling any time violence isn't being visited upon them, the film is either too restrained for its own good, or goes so far in the other direction that it just has characters wailing about their sadness. That's hardly surprising, of course, since slavery in America was a shameful abomination, and continues to be one in some parts of the world, but the appropriateness of their reactions isn't an issue. What is a problem is the sameness with which McQueen depicts them. All three of his features to date have been fairly punishing considerations of how much suffering body and soul can endure, and at a certain point they all become wearying, deadening experiences. There's never even the smallest modicum of levity or triumph in McQueen's work, as evidenced by the way he depicts the sole success Solomon enjoys - convincing his benign master Ford (Benedict Cumberbatch) to let him engineer a new route through a river - with exactly the same sombre tone that he uses when Solomon is savagely beaten after first waking up in chains.

This monotony is largely a byproduct of the story itself: In order to survive, Solomon has to hide his true identity for fear of being labelled a liar and possibly killed for his perceived insolence. It's a lesson that he learns as soon as loses his freedom, and it's one that he has to finesse as the story progresses. First, he must hide his past life and answer to the name Platt. Then, he hides his emotions, as a moment of defiance against one of his handlers (Paul Dano) ends with him being lynched. (This is possibly the best example of McQueen's style aiding the story, since there is no more perfect a visual representation of Solomon's situation than the one of him hanging with his feet barely on the ground, cruelly suspended between life and death and reliant on the whims of others to determine his destiny.) Finally, he must hide his intelligence in order to survive working for the sadistic, idiotic Edwin Epps (Michael Fassbender). Solomon's survival is predicated on the suppression of every aspect of his identity. This makes for a cathartic ending, since it is only once he is free that he expresses what he has been bottling up for so long, but does make the build up feel muted.

In the broader context of films and literature about slavery, Solomon's experiences are depressingly common, so seeing him being whipped, or forced to dance for his master's amusement is shocking, but not surprising or new. The parts of the film that work best, at least in terms of shedding light on the culture of slavery, are the moments that aren't physical. Seeing Epps rip the flesh off the back of his favoured slave Patsey (Lupita Nyong'o) is horrible to watch, but there is nothing more disturbing to me than the moment when Clemens (Chris Chalk), who is transported on the same boat as Solomon, is collected at the dock by his owner, who he runs to with open arms. He isn't free - he just goes from a situation where he didn't know who would be his master to one where he does. He remains a slave, yet he is happy about it, because his situation isn't as completely horrible as it might have been.

Similarly, although Epps is the showier, more monstrous character, and the one who is easiest to recognise with an Oscar nomination, he's nowhere near as intriguing a figure as Ford. As played by Cumberbatch, Ford seems a decent man, one who treats his slaves as well as can be expected, listens when Solomon comes to him with ideas, and even presents him with a violin as a gift. Solomon even defends him when it is pointed out that, despite all his good points, Ford is still a slave owner, by arguing that he is only one because of the circumstances. In another situation, he would be considered a good and kind man. Yet he is still a willing participant in that system, and only shows a moment's doubt before buying a mother and separating her from her two young children.

Ford illustrates how pervasive and insidious American slavery was, and how even men who might have known that what they were doing was immoral still went along with it. The horrors that define the second half of the film are conventionally awful to behold, as is Epps' declaration that beating Patsey (as well as the way he uses her for sex) is not a sin. ("Sin? There is no sin. Man does how he pleases with his property.") Yet they are not as powerfully illustrative of how dehumanising slavery is as watching people jovially examine naked slaves, considering them with the same consumerist disinterest they might display whilst examining horses or pieces of furniture. The most important thing that the film does, from a historical perspective, is show that slavery in America was a system of both degradation and gradation; it manifested itself in ways that went beyond the basic cruel master-noble slave dynamic.

Even Solomon Northup himself is shown to be complicit in the system. Prior to being drugged and sold, he doesn't spare a second glance for the slaves around him when he visits Washington, nor does he give much thought to seeing a slave being dragged away by his master as Northup is shopping with his family. Living in the North as a free man, slavery doesn't register as a concern for him until he's hauled away in chains and forced to confront the fact that, as far as many of his countrymen are concerned, he is nothing more than property, and all that was standing between him and a life of servitude was a piece of paper saying that he was free. A piece of paper that no white man or woman would ever need.

That realisation is what gives the film's ending its power, and what, I think, was so overwhelming about it on first viewing. McQueen's film is a grueling experience, but what you expect at the end of such an unremitting story is some catharsis, especially when you know beforehand that there is a definite end to Northup's life as a slave. Yet his return to his family is not the kind of easy, uplifting triumph of Andy Dufresne breaking out of Shawshank. The moment when Solomon meets his children again to discover that they are now adults, that they are both married and that he has a grandson who bears his name, is a crushing, heartrending one. He may be free once more but he's lost his life, is a stranger to his family, and his entire conception of the world has been irrevocably shattered. He doesn't even get justice because as a black man he is unable to testify against the white men who kidnapped him. The ending makes for an interesting reversal of the end of McQueen's first film, Hunger, about the death of Bobby Sands. In Hunger, dying represented victory: in 12 Years a Slave, surviving feels like a defeat.

Looking back on my first viewing, I think the palpable loss that the ending represents was what I responded to, far more so than the two hours that preceded it. Prior to that moment, the film was handsomely made, brilliantly acted, and offers an insight into the many different ways in which slavery permeated the minds and lives of Americans, but it was never all that engaging as a piece of storytelling. This is especially true once it gets to Epps' plantation, after which it repetitively bludgeons its points home without saying anything that the first half had not already said. It's a film with an important, vital message, but it's often too stately and reserved to bring the horrors to life, especially as its unrelenting brutality becomes desensitising by the final reel. But then you have the astonishing moment when Solomon Northup lets his emotions out, and the power of the film comes crashing through. It's a brilliant ending to a good, occasionally great film that too often feels more like homework than art.

Editor's Note: An earlier version of this review incorrectly stated that Solomon Northup had two daughters, when in the film has a son and a daughter (and in real-life had two daughters and one son). This error has now been corrected.
By Edwin Davies
Labels: 12 Years A Slave, 2013, Chiwetel Ejiofor, drama, film, film review, Oscar contender, review, slavery, Steve McQueen
Newer Post Older Post Home