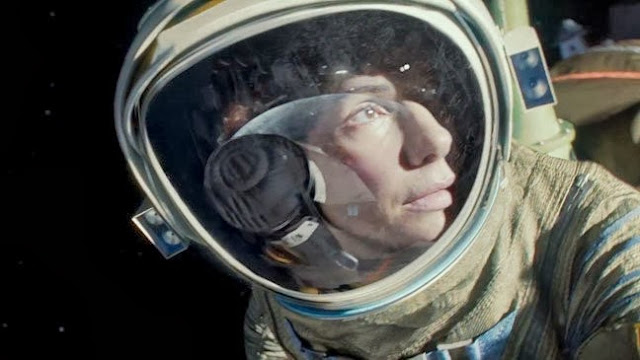 Gravity, the latest film from director Alfonso Cuarón, opens with a bravura sequence in which the camera follows the actions of a trio of astronauts as they set about repairing the Hubble telescope. In an unbroken, twenty minute take we watch as the cocky yet assured veteran Matt Kowalski (George Clooney) and the jittery newcomer Ryan Stone (Sandra Bullock) float high above the Earth, talking to each other about their mission in-between banter with Mission Control. There's a loose, convivial feel to the scene, but it's also disquieting. As the camera looks on coolly, things start to go terribly, tragically wrong. Pieces of debris hurtling around the Earth start to pepper the shuttle and telescope, causing catastrophic damage and sending Stone tumbling into the emptiness of space. With limited oxygen and their transport destroyed, it falls to Kowalski and Stone to try to make it back to Earth alive before they suffocate or get hit by the debris again.

While it's easy to focus on the technical brilliance of that first scene, which really is a marvel of both digital cinematography and effects which truly warrant being called special, it also serves as a statement of intent for the film. Cuarón's floating, weightless camera bears witness to events of sudden destruction and deadly misfortune with a stillness that is deeply unnerving (as is Cuarón's insistence of letting the scenes play out silently). It refuses to give the audience any relief from the terror onscreen. Despite featuring the kind of devastation porn that has come to plague modern blockbusters, the film completely avoids the frenetic cutting or shaky camerawork that has come to be associated with it. Instead, Cuarón allows the destruction to play out in long, inexorable takes, showing cause and effect unfold with a rigour and focus that is wonderfully intense. It leaves the audience and its characters breathless, though the latter experience that sensation for much more life-threatening reasons.

As much as it is a work of thrilling spectacle - a sort of Poseidon Adventure to the Stars -  Gravity is also a deeply human story of survival in the worst situation imaginable. Despite the scale of the disaster that befalls the characters, the number of people affected can be counted on one hand, so the stakes are always clear and concrete. There's no abstract number of possible casualties; we know precisely how many people are killed by the initial storm of debris, and we know all too well how many lives remain in peril. Cuarón never lets us forget that key fact, and neither do Clooney or Bullock.

Stranded hundreds of miles above the Earth with little hope of rescue, the two characters are left with nothing but their wits and very limited resources for their salvation. In that respect, it very closely mirrors more Earthbound survival films like Open Water or the upcoming All Is Lost, with the added complication that the vacuum of space makes every slight movement incredibly difficult to achieve, and each miscalculation potentially fatal. It's a brilliant premise because it makes even the many quiet moments feel incredibly menacing. Scenes of Stone and Kowalski drifting slowly towards the International Space Station, talking about their lives on Earth as a means of remaining calm, are underscored by the looming Earth, emphasising just how insignificant they are compared to the indifferent vastness of space (it's also in these moments, moreso than the action sequences, where the 3D really makes an impact; it suggests the depth and breadth of the universe beautifully, and suggests the film could easily have been called Vertigo if someone else hadn't already called dibs on that title). There are moments of real wonder in Gravity, times when the characters are able to stare at the sunrise from high above the clouds, but it's a wonder tinged with great fear and uncertainty.

Key to maintaining that dread are the performances from Clooney and Bullock, who are the only actors to appear onscreen for the entirety of the film. Clooney does fine work as a man who has been on plenty of missions in his time and is stoic and pragmatic in his attitude to getting home, often beginning aimless anecdotes or prodding Stone with questions to keep her engaged in surviving, but his stock charm and charisma makes him a bit one-note, even if that note is an important and vital one in terms of the broader story. Sandra Bullock is the real star since she is the one who has to go from despondent and desperately fearful to determined survivor over the course of 90 minutes. Her performance grounds a film which could have spun out of control with a lesser performer, giving every cresting wave of disaster real importance and weight. It's obvious, given the setting, but comparisons to Sigourney Weaver's performances as Ripley in Alien and Aliens are more than warranted; as a kind of orbital Job constantly buffeted by disaster, she gives easily the best performance of her career.

Even though it bears a closer resemblance in terms of plot to man in extremis pictures like the aforementioned Open Water, not to mention Apollo 13 (which is somewhat obliquely referenced by having Ed Harris play the (unseen) voice of Mission Control) the film it most reminded me of was Cloverfield. As was the case with Matt Reeves' handheld monster movie, Gravity only shows one perspective of a story that would more traditionally involve many more. We know that the events in space would be reflected on the ground as well, with the friends and family of Stone and Kowalski, as well as the countless people transfixed as the disaster is related by the news, watching on helplessly, but we never see any of them. Cuarón's script, which he co-wrote with his son Jonás, leaves no room for that kind of external drama, and instead remains resolute in its focus on how the disaster impacts the two characters we can actually see, and how they react to it in turn.

That myopia lends the film much of its power and gives it a refreshing leanness (Seriously, why is it rare that a hugely expensive, visually dazzling movie clocks in at an hour and a half?) but does highlight some of the aspects that don't work as well. Some of the dialogue is very awkward and clunky, though some of it can be contextualised as professionals just going about their job, and the constant stream of misfortune that befalls the characters can get a little aggravating after a while (though Stone herself expresses that exact same sentiment towards the end) though it never gets boring or manages to wear out its welcome. But it's hard to quibble with these issues, which are incredibly minor in the face of what Alfonso Cuarón has achieved. Gravity is an astonishing cinematic experience, one that arguably functions best as a ride than as a narrative film, but it is one hell of a ride.