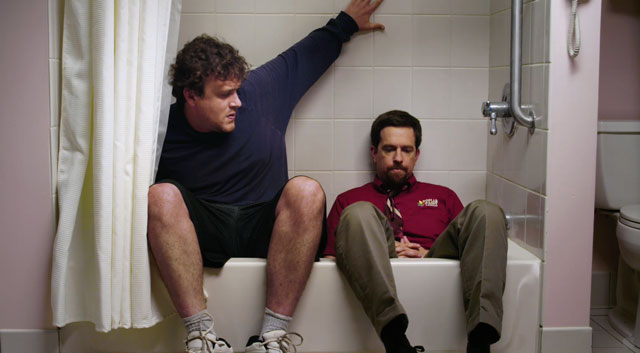 Jeff (Jason Segel) is a thirty-something slacker who lives in the basement of his mother's house, where he spends his days getting high and pondering the nature of existence. Jeff believes that everything is connected, and that absolutely everything that happens must happen for a reason, even wrong numbers. When he answers the phone and finds someone looking for a "Kevin" on the other end, Jeff assumes that there must be some great significance to it, so over the course of a day when he is meant to be going to the store, he tries to figure out what that significance may be, and how it relates to his life. In the process, he inadvertently meets up with his brother Pat (Ed Helms), and the two coincidentally happen to see Pat's wife Linda (Judy Greer) out with another man, and the two find themselves trying to determine whether or not she is having an affair.

Considering how much of its story is concerned with fate, chance and predetermination, Jeff, Who Lives At Home is a very loose, unfocused film that spends much of its fairly brief running time actively fighting against having a traditional narrative structure. Each event in the film follows the previous one in a way that feels incredibly tangential, and this approach makes it seem as if Jay and Mark Duplass showed up with cameras and created the film on the fly, following their whims and creating the story after the fact. (Given the heavily improvisational nature of their earlier films like The Puffy Chair and Baghead, I would not be surprised if they had used that approach, or at the very least one similar to it.) This gives the film a feel that is both energetic and laid back, allowing it to coast on the charm of its cast as they make their way through the often unpredictable story.

Segel and Helms make for a great double act, with the former bringing a fragile naivete to Jeff that is by turns charming and kind of heartbreaking, and the latter providing a strong contrast by playing Pat as an embittered, frustrated man who seems to have more control over his life than his brother does, yet iin his heart feels like he has far less. It's a fun dynamic that makes their interactions funny even when nothing especially comedic is happening on screen, which is a perfect fit for a film that feels like it isn't going anywhere in a hurry, but content merely to follow these characters and see where they end up.

As the film reaches its final act, though, it becomes apparent that the seeming chaos of the story is actually much more carefully constructed. The main plot line intersects with a subplot about Jeff and Pat's mother (Susan Sarandon) and a secret admirer at her office in a way that feels both natural and completely out of nowhere, as all the characters find themselves meeting on a gridlocked bridge. Much as in Jeff's conception of reality, the film reveals itself to be more than a mere assemblage of disparate events, but a deliberately shaggy - but undeniably deliberate - story about people embracing the present and trying to move on from the pain of the past. In its surprisingly moving final act, the film manages to make sense of its muddled plot in a way that is incredibly affecting, even if the individual strands of the plot are frustratingly aimless whilst they are unfurling.