Doctor Who - The Impossible Astronaut

Following on from last year, which proved to be one of the more popular things I've ever done with this blog, I will be recapping the new series of Doctor Who an episode at a time, starting with the series premiers, The Impossible Astronaut. 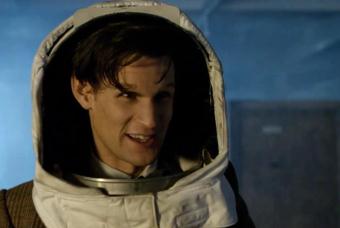 Ever since she was introduced in The Silence in the Library, Doctor Who has treated the character of River Song (played by Alex Kingston) with a mix of flirty irreverence and heartbreaking sadness that, at its best, can be both hilarious and touching, at its worst can be terribly awkward. On the one hand, her status as an important (as yet undefined) figure in The Doctor's future (which is her past) has allowed her to be pretty flippant about everything that happens to her, The Doctor and Amy; why worry when she knows that everything is going to be okay? On the other, her relationship with The Doctor is, by necessity, a tragic one since, as she says in this premiere, their lives will always be going in opposite directions. Her conversation with Rory towards the end of the episode, whilst a touch too "Time Traveler's Wife" for my liking, was probably the best use of the character so far, a poignant and telling conversation that spoke volumes about the agony and the ecstasy of an existence spent waiting for those brief moments of contact with someone who is gradually forgetting who you are.

The Impossible Astronaut strained that balance to pretty great effect by having her, Amy and Rory witness a truly traumatic event; the death of The Doctor. Although, as is the case when you're dealing with a time traveler, he did not stay dead for long since it was the 1100 year old Doctor we hadn't seen before who was killed by a mysterious astronaut, not the 900 year old that we all know and love.

There's been a lot of speculation leading up the start of the new series over which of the four characters would die in the first episode, and The Doctor always seemed like the most likely. River Song could not die because we have already seen her death in Forest of the Dead and, whilst the show could have introduced the idea of her dying which would create a paradox, it would have been a bit of a heady start to the series. Admittedly, essentially killing The Doctor in the first ten minutes was a pretty bold start, even if it was somewhat countered by bringing him back from the dead five minutes later. Amy and Rory also could be discounted because they have both already died in the course of the series, and I'd trust Steven Moffat to be clever enough to avoid retreading old ground so soon.

There was a lot of fun to be had in this episode, from the reintroduction of the characters - Amy and Rory trying to figure out where in time The Doctor has been by reading history books and missing his appearance in an old Laurel and Hardy short, River back in jail - who are all summoned by mysterious TARDIS blue letters to a spot in America. Then, once Future Doctor gets blasted with green energy and Present Doctor takes everyone back to 1969, things really got going thanks to an hilarious scene involving The Doctor, Richard Nixon and a special operative (played by Mark Sheppard, who I always remember for his role as small-time crook Badger in Joss Whedon's late, lamented Firefly). From then onwards it was like writer Steven Moffat's greatest hits; flirtatious banter between River and The Doctor, moments of emotional connection between the characters and clever use of time travel as an emotionally resonant device, rather than a mere plot contrivance.

Even the new aliens - gray humanoid creatures with creepy wrinkled and distorted faces - seemed to share with Moffat's most famous creations, The Weeping Angels, an ability that was reliant on people not looking at them to work, though in this instance they were able to erase themselves from peoples' memories once they looked away from them, rather than only being able to move when no one is looking at them. And they were creepy. Even though I could sort of tell it was coming, the moment when River descended into a tunnel and shined her torch across the faces of a host of them really made me jump.

As ever, though, when an episode is only the first half of a two-parter, it feels incomplete. There were lots of moments that worked in the moment, but I don't know if they will pay off. Based on this start, and the past form of Moffat, I'm pretty stoked to see what happens next week and for all the ones to follow.

Speculation: So, is the small child in the astronaut suit the same one that shot The Doctor? I don't think it is. I'm pretty sure that it is some past version of River Song that we haven't met yet, since The Doctor knew the astronaut and there have been hints in the past that River will one day have to kill The Doctor, unless there is someone else she knows who she could describe as the best man who ever knew...
By Edwin Davies
Labels: Doctor Who, film review, television
Newer Post Older Post Home