There are far worse products of a divorce than this. 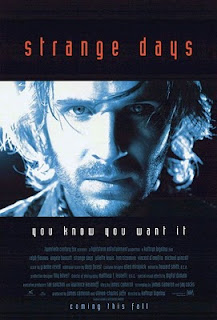 The recent announcement of the nominees for the 2010 Golden Globes, aside from confirming that the U.K. really gets fucked over when it comes to release dates since over half the films nominated haven't even been released here yet (bitter? Me? No!), provided a brief moment of humour for the pop-culture heads amongst us when it became clear that former husband and wife James Cameron and Kathryn Bigelow would be competing against each other for the Best Director prize,(Go Team Bigelow!) a battle that I am sure will be repeated come Oscar time.

This minor contest between a couple who have been amicably divorced for nearly 20 years compelled me to check out Bigelow's 1995 science fiction film, Strange Days, which Cameron co-wrote with Jay Cocks (The Age of Innocence, Gangs of New York) and which I've been meaning to see for some time.

Strange Days takes place in Los Angeles on the 30th and 31st of December, 1999, and the people of the city seem to be in the grips of a pre-millennial mania. Gangs roam the street, people stand on their doorsteps armed with guns and clubs waiting to take down anyone who dares set foot near them, and former cop Lenny Nero (Ralph Fiennes) plies his trade as a buyer and seller of experiences. Using machines called SQUIDs (Superconducting Quantum Interference Devices), Lenny is able to take pre-recorded memories and download them into the brains of his clients, allowing them to partake in any number of sordid sexual fantasies they so desire, though Lenny himself has more conservative tastes and uses the SQUIDs to vividly recreate his own memories of his lost love, Faith (Juliette Lewis).

The SQUIDs not only give the film an interesting science fiction hook that is reminiscent of the wildly imaginative works of Philip K. Dick and William Gibson (Gibson's story "Johnny Mnemonic", later turned into a terrible film, uses SQUIDs for the similar but opposite purpose of extracting memories) but also serve as a helpful gateway into the morality of this brave new world and as the jumping off point for the mystery that drives the plot of the film.

The opening sequence of the film is a bravura point of view scene in which Lenny experiences the memory of a robbery in order to see how viable it would be as a product for his customers. When the memory ends with the death of the criminal whose experiences are being experienced, Lenny refuses to buy it on the grounds that he doesn't buy "snuff". Already we see that the technology he is peddling has its own stratified market, with the sordid sexual stuff being akin to pornography and anything beyond that being taboo. So when Lenny starts to receive discs containing memories of a man raping and murdering a friend of Lenny's, a friend who wanted to tell Lenny something before they were killed, we know that this is beyond the pale. Lenny then decides to investigate the death of his friend, and its possible connection to the death of a rapper (Glenn Plummer) whose outspoken lyrical attacks on the police force had made him a community leader amongst the angry and disenfranchised members of L.A. society.

James Cameron has said that the film was in part inspired by the Rodney King verdict and the the riots that it sparked. This is reflected in the not in the least bit subtle staging of Jeriko One's murder, which is seen as a memory of one of the people at the scene, and the way in which the disk the memory is on becomes a ticking time bomb in the third act of the film that could spark off a wave of violence that could destroy the city. The influence of the King case can also be seen in the general atmosphere of the film: Strange Days takes place in a Los Angeles that never fully recovered from the L.A. Riots. It's a city in which a constant level of racially motivated anger and violence has held sway over the populace for the better part of a decade, prompting the police to become more and more brutal until the city has become a de facto police state. Kathryn Bigelow does a fantastic job of generating and maintaining this level of dread and paranoia throughout in her relentless pacing and moody, neon-soaked cinematography.

Sadly, the ambience of the film does not quite mask its failings. The plot of the film plays out like an uneasy mix of Philip K. Dick and James Ellroy, with the science fiction invention often overshadowing the mystery elements, rather than serving them. Worse, there are two fatal miscastings at the heart of the film, that of Juliette Lewis and Tom Sizemore. Maybe it's a personal thing, but I've never really liked Juliette Lewis all that much and I found her presence in the film very, very grating (though there is every chance that this is solely down to her murdering some P.J. Harvey songs) and antithetical to the notion that she was meant to be the ideal woman in Lenny's eyes. As for Tom Sizemore, he is at his most sleazy and creepy throughout and there is never a hint of doubt that he is up to no good. It's the equivalent of casting Sean Bean in anything; it pretty much kills any dramatic tension because you end up waiting for the moment when the character is revealed to be a baddie.

Strange Days is a film that collapses under the weight of its own ideas and ambition, but I'd much rather it failed because of too much ambition than none at all. At two and a half hours it is much too long but at no point in that time is it dull and at no point in that time is it less than fascinating. I just wish that it as great as its promise suggests it could have been.
By Edwin Davies
Labels: film review, James Cameron, Kathryn Bigelow, L.A. Riots, Rodney King, Strange Days
Newer Post Older Post Home