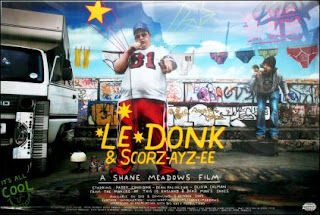 The second of Shane Meadows' ''accidental feature films'', Le Donk & Scor-zay-zee is an improvised mockumentary in which a film-maker (Meadows) follows around Le Donk (Paddy Considine), a mouthy roadie who believes that his new signing, rapper Scor-zay-zee (Scor-zay-zee) will crack the big time if he can get him a support slot for the ''Arctical Monkeys'', as Donk calls them.

Much has been made of the fact that Le Donk was made in five days (four days of shooting, one for pick-ups) with no script, no concrete idea other than that Le Donk would be let loose at a music festival, and no sense of what the film would be about beyond the fact that it would feature these central characters. It's a brave and exciting way of making films, but it wouldn't amount to much if it wasn't funny. Fortunately, it is.

Not only is it funny, it's hysterical. As Le Donk, Considine improvises furiously, playing off everyone around him, whether or not it's a lodger in his house, his pregnant ex-girlfriend (Olivia Coleman) or the Arctic Monkeys. Le Donk is the purest distillation of every motor-mouthed blagger you've ever met, the guy who is all gob and no substance, and seeing him bigging up Scor-zay-zee and saying how he is going to make him the next big thing is funny, but it's even funnier when Scors does it all by himself and Le Donk is resigned to riding on his coat-tails and ''pressing two buttons on a keyboard''. But there's also something really endearing about Le Donk, his relentless energy and verbal looseness. Even when he's hurling abuse at a Meadows, Scors or producer Mark Herbert, you can't dislike him because he is such a ridiculous larger than life character and you know that he will having you laughing either at or with him at a moment's notice, so any anger or bitterness he displays never overshadows how much fun it is to spend some time in his company.

Shane Meadows' style is very loose and playful, much like his previous film, Somerstown. We are made aware early on that the film has a very small crew, consisting of only two cameramen and a boom operator, so there is a feeling of uninhibited access to Le Donk's life and, from a film-making standpoint, a sense that we are witnessing almost unbroken improvisation from the cast. It feels very liberated and its 71 minute running time absolutely flies by.

If I have one complaint about the film, and I can only think of one at the moment because I loved it, it would be that the inherent scrappiness of the film and the way in which it was made do make for some minor problems. The mere fact that we are so aware of the camera crew throughout, due to the nature of the story, does mean that some of the later scenes do seem a bit more staged, probably because they were pick-ups filmed long after the rest of the film had been done, so they feel less spontaneous than the rest of the film, particularly one scene between Le Donk and Scorz in which Le Donk talks about his relationship with Olivia which then ends with him getting a phone call saying that his baby has been born. It’s a funny scene - which then leads onto a much funnier scene – that’s also quite sweet, but it does stand out from the rest of the film.

A bold experiment in how to make a feature film that has yielded a warm, funny and delightful comedy. Iconoclasm is rarely this joyous.
By Edwin Davies
Labels: film review
Newer Post Older Post Home